Accumulated earnings for the first nine months of the year stood at €815.8 million, up 1.8% on the back of the positive sales performance Online sales grew by 28% between March and November to account for 9.2% of total sales in Spain The company’s gross margin reaches 67% in the third quarter up by 0.1 […]

The Spanish group has joined the global coalition of leading fashion brands that are committed to a common core of key environmental goals concerning Global Warming, Biodiversity and the Oceans. Following its adherence to the Business Ambition for 1.5ºC initiative, Tendam has also been recognised by the United Nations Global Compact for its commitment to […]

Tendam acquires the Hoss/Intropia brand for its growing portfolio

Tendam acquires the Hoss/Intropia brand for its growing portfolio Hoss/Intropia, which will benefit from Tendam’s strong operating and management structure, will cement the Group’s position in women’s apparel within the premium mass market. Madrid, 25 November 2019 – Tendam, one of Europe’s leading fashion retailers operating in the specialised chain segment through the Cortefiel, Pedro […]

Presentation of the X edition of the SERES Awards Directors of almost 150 SERES companies celebrate 10 years of social commitment The SERES Foundation celebrated the 10th edition of its annual awards in recognition of the best strategic and innovative actions capable of generating value for society. Ford Spain, Kern Pharma, Mutua Madrileña and Tendam […]

Cortefiel collects the amount of 49,000 euros for the project Perfectos Imperfectos of the Cadete Foundation thanks to the sale of a capsule collection consisting of two t-shirts and a sweatshirt. The main objective of this solidarity initiative has been to raise awareness of disability. With this collaboration, 59 boys and girls with different types […]

Tendam continues to improve its margins in Q1

The Group capitalises on the combination of a streamlined store network, a strong CRM area and the high profitability of its digital operation The company takes strategic steps towards becoming the leading data-driven retailer in the market, with high customer engagement levels, premium operational quality and unique analytical and CRM capabilities. The Tendam brands’ loyalty […]

Opening of the first Fifty store in Mexico, in the city of Santiago de Querétaro.

Moody’s upgrades Tendam Brands’ rating to “B1”, with a stable outlook

Ratings agency Moody’s has upgraded the corporate family rating (CFR) of Tendam Brands – one of Europe’s leading fashion retailers operating in the specialised chain segment– to B1 from B2 and its probability of default rating (PDR) to B1-PD from B2-PD, with a stable outlook. According to Moody’s, the rating upgrade reflects the strengthening of […]

Results of Tendam Brands for the 2018/19 financial year

Jaume Miquel’s new responsibilities will be in addition to his current role as CEO, a post he has held since 2016. The Board of Directors of Tendam Brands, the parent company of Tendam, one of Europe’s leading fashion retailers operating in the specialised chain segment through the Cortefiel, Pedro del Hierro, Springfield, Women’secret and Fifty […]

Ratings agency S&P Global has upgraded to ‘B+’ with a stable outlook the rating of Tendam Brands, one of Europe’s leading fashion retailers operating in the specialised chain segment through the Cortefiel, Pedro del Hierro, Springfield, Women’secret and Fifty brands. S&P Global bases its recommendation on the fact that Tendam demonstrated positive progression of its […]

Coming fashion: sustainable with the environment, affordable for the consumer

Tendam together with the Centro Superior de Diseño de Moda de Madrid (CSDMM) and the Universidad Politécnica de Madrid (UPM), held the first Conference on Sustainability, Responsibility, and Innovation in Fashion Design, which highlighted the need for the sector to be sustainable and affordable for the consumer. Tendam, one of the leading European companies in […]

Since the end of March, Cortefiel and PdH customers can click and collect the purchase made online, not only in the physical stores of these brands, also the clients have the option of picking it up at the selected Springfield store. This initiative is part of Tendam’s omnichannel strategy, which takes advantage of the synergies […]

Tendam consolidates its presence in Armenia and Kazakhstan

Tendam launches new Springfield and Women’secret stores in the two Eurasian countries. In the case of Armenia, Springfield opens its first point of sale for men and women at the Dalma Garden Mall, the first shopping mall in Yereban, the capital of the Caucasian country. Tendam was represented in Armenia with Women’secret which has two […]

Tendam delivers more than 156,000 euros to the four entities benefiting from the project Involucrados In the 13 years of this initiative almost one and a half million euros have been raised. Tendam increases the amount collected one more year and distributes 156,032 euros between the Pequeño Deseo Foundation, ItWillBe, the Síndrome de Down Madrid […] 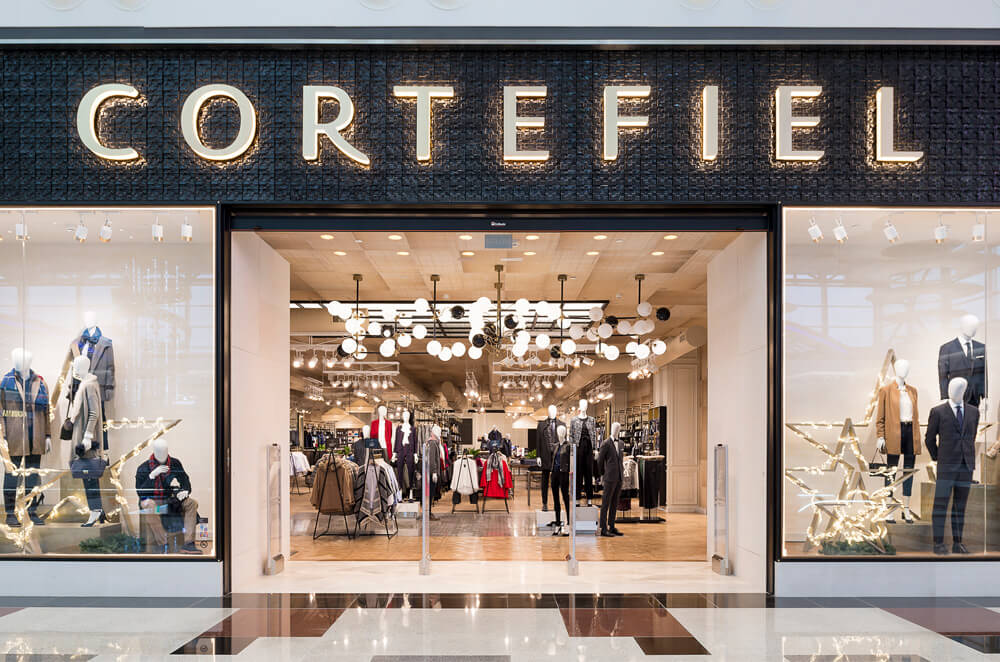 The company has posted pre-tax profit of €38.9 million, versus losses of €272,200 for the same period last year. Total sales reached €554.4 million. Online sales grew by 27% to represent 7% of total sales in the Iberian region. The gross margin now stands at 62% and has remained steady above the 60% threshold. Tendam […] 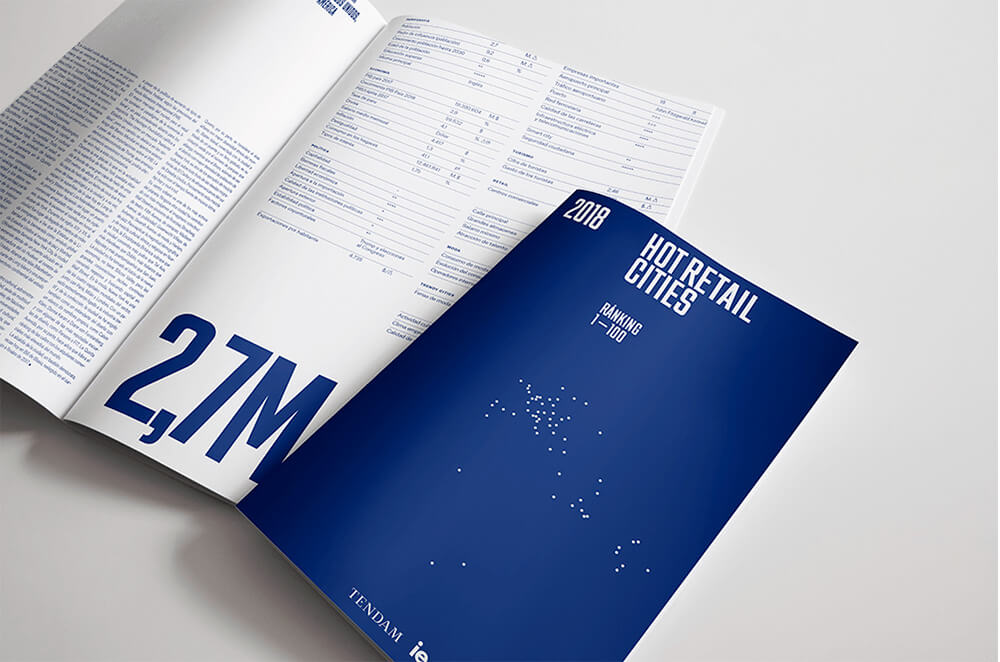 Two Spanish cities feature among the world’s top 100 retail cities: Barcelona is ranked 29th, while Madrid sits in 36th The Hot Retail Cities report provides an inaugural list of the world’s 100 most attractive cities for retail based on around 50 criteria measuring their economic, commercial, political and cultural landscapes. Fostered by Tendam and […] 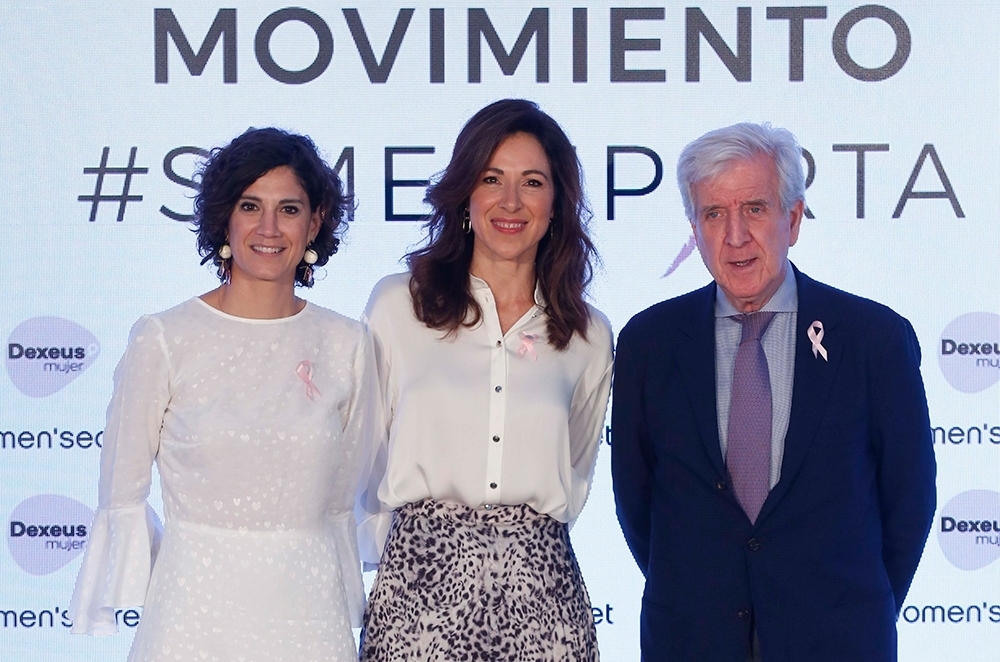 Women’secret creates the #SIMEIMPORTA movement to help those who have suffered breast cancer. 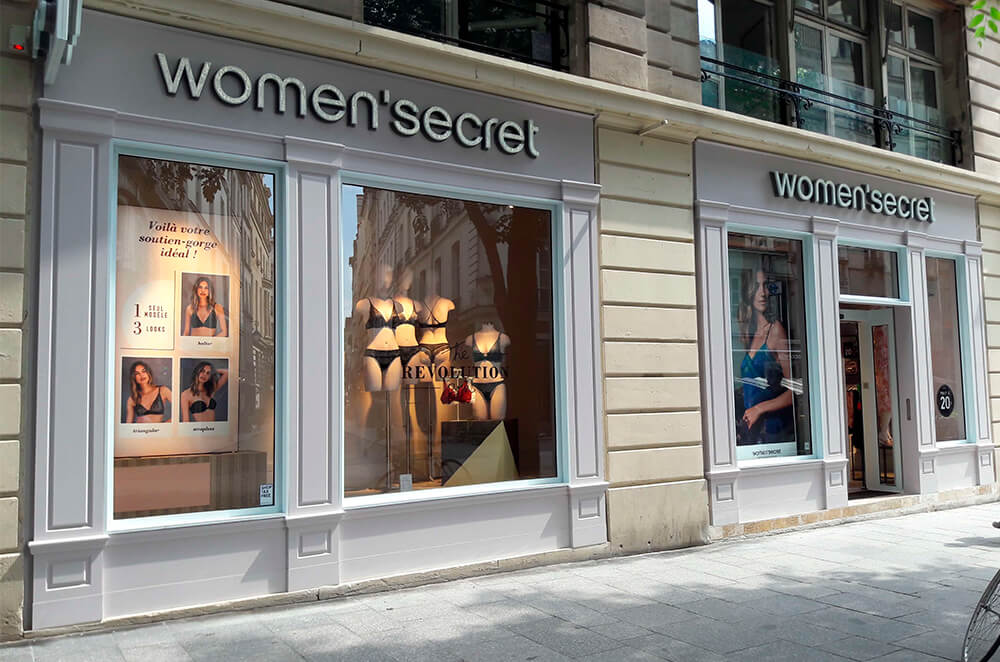 Women’secret, the lingerie and intimate apparel brand of Tendam (formerly Grupo Cortefiel), is introducing its new store on Rue Montmartre, the central Parisian neighbourhood. Women’secret is continuing its international expansion plan and is opening a store in the capital of France again, a country where it will continue with more openings throughout the year.   […] 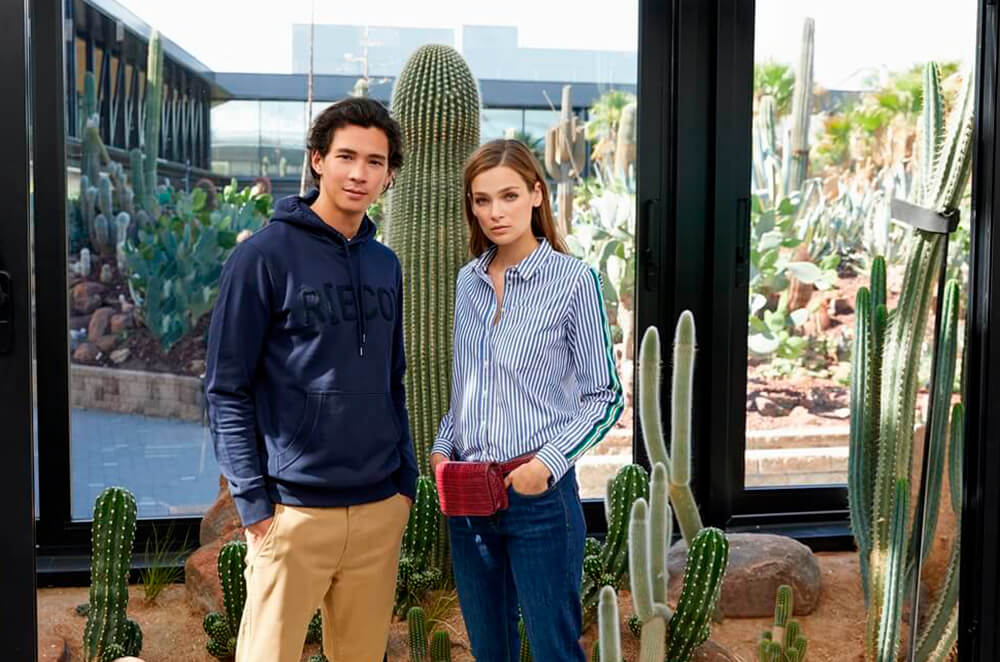 The brand’s first sustainability project based on the use of organic fibres and sustainable technologies in denim finishing processes Springfield, Tendam’s casualwear fashion brand, is launching the R[ECO]NSIDER project, its first collection of sustainable garments. This project focuses on two initiatives related to the use of organic fibres and denim finishing processes. The first one […] 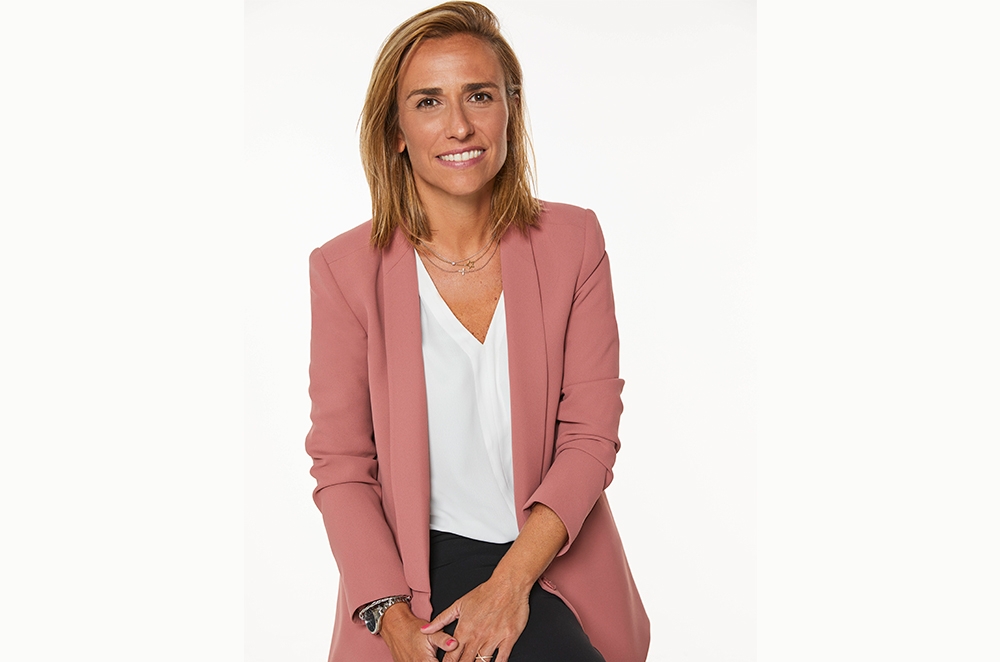 As the new Director of Legal Services, Oña will also sit on the Management Committee and report directly to the CEO. She will also take up the role of non-member Secretary of the Board. Mar Oña has 15 years’ experience in senior management roles in different firms within the legal sector. Her previous employers include […] 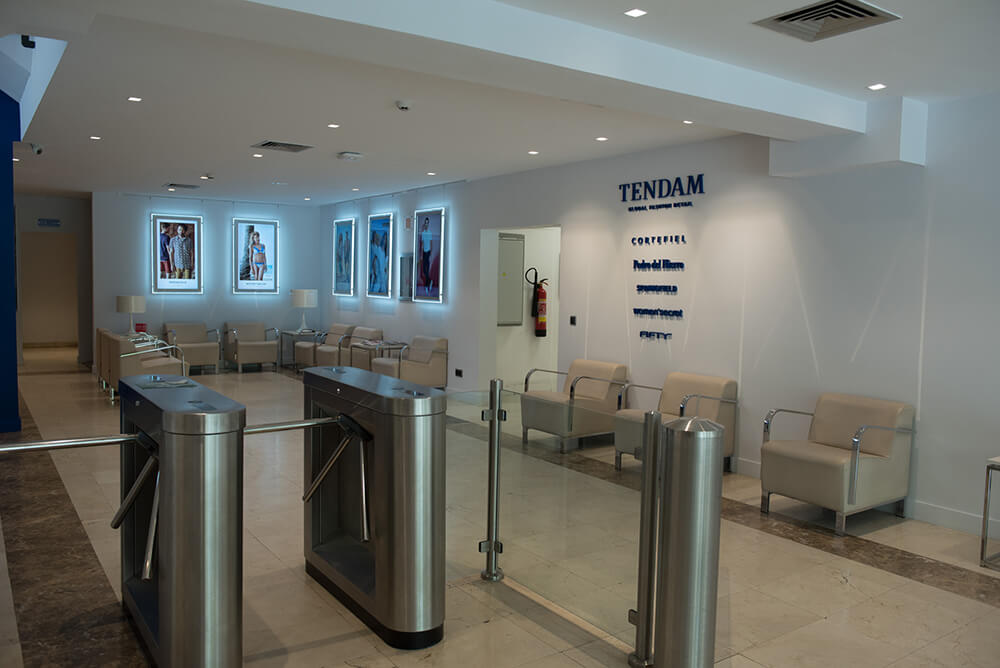 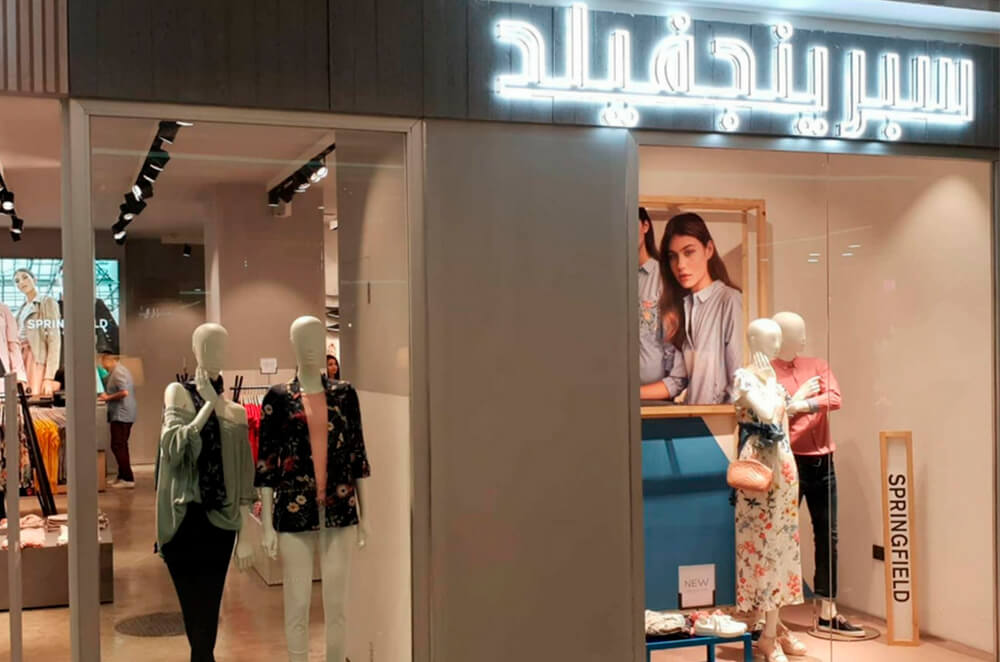 The Spanish group makes it debut in the Iraqi market with Cortefiel, Springfield and Women’secret which are opening their stores in Baghdad Tendam launches its first Cortefiel, Springfield and Women’secret stores in Baghdad. The stores are opening in Al Mansour Mall, one of the largest shopping and leisure centres in the capital with the longest […] 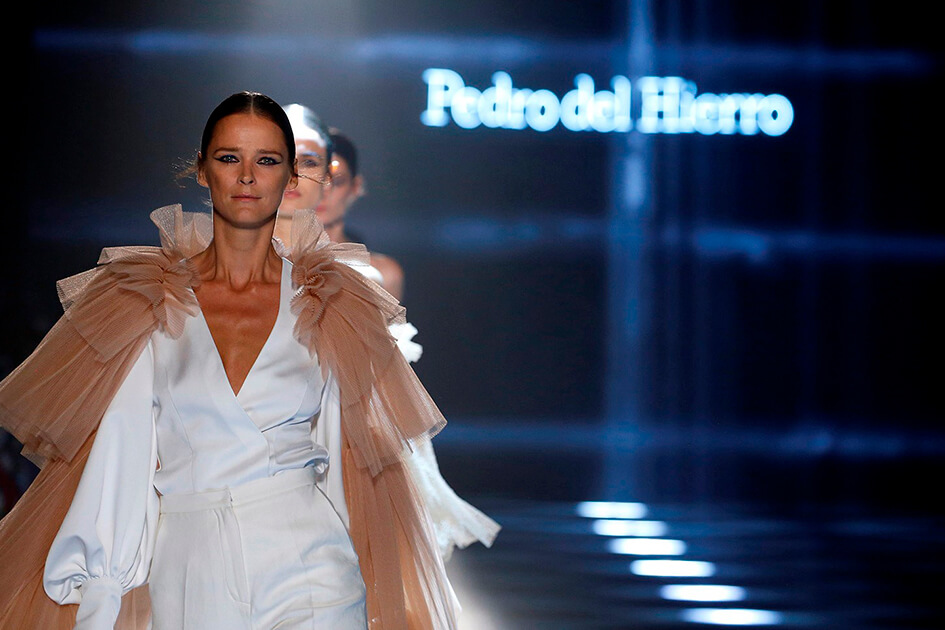 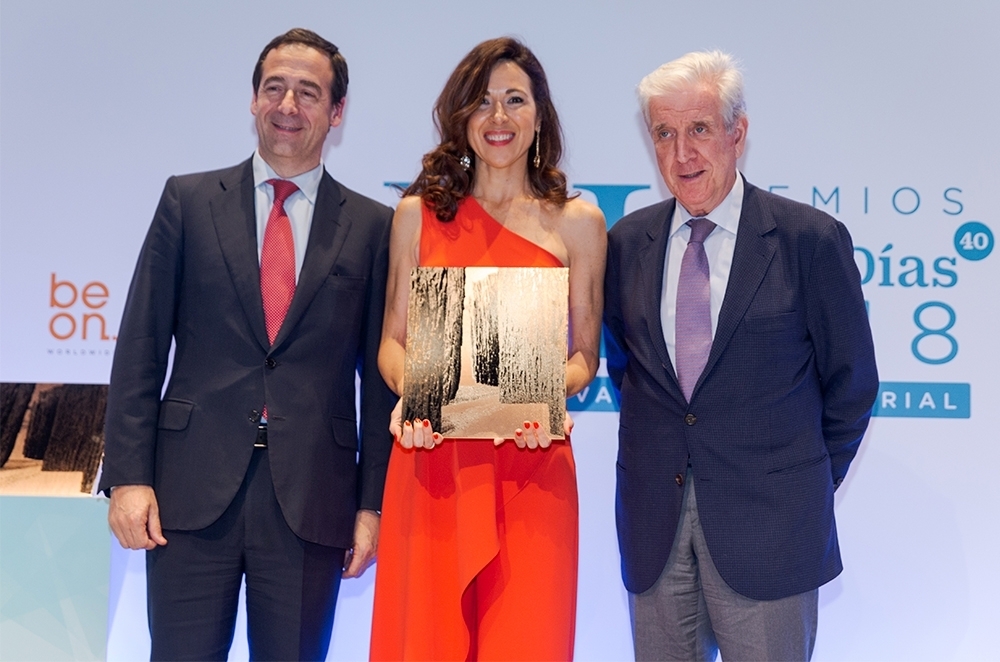 Things That Do Matter has won an award at the 11th edition of the Cinco Días Awards for Business Innovation. It was awarded last night during a gala that was attended by the new Minister of Science, Innovation and Universities, Pedro Duque. The aim of THINGS THAT DO MATTER is to normalise the disease and […] 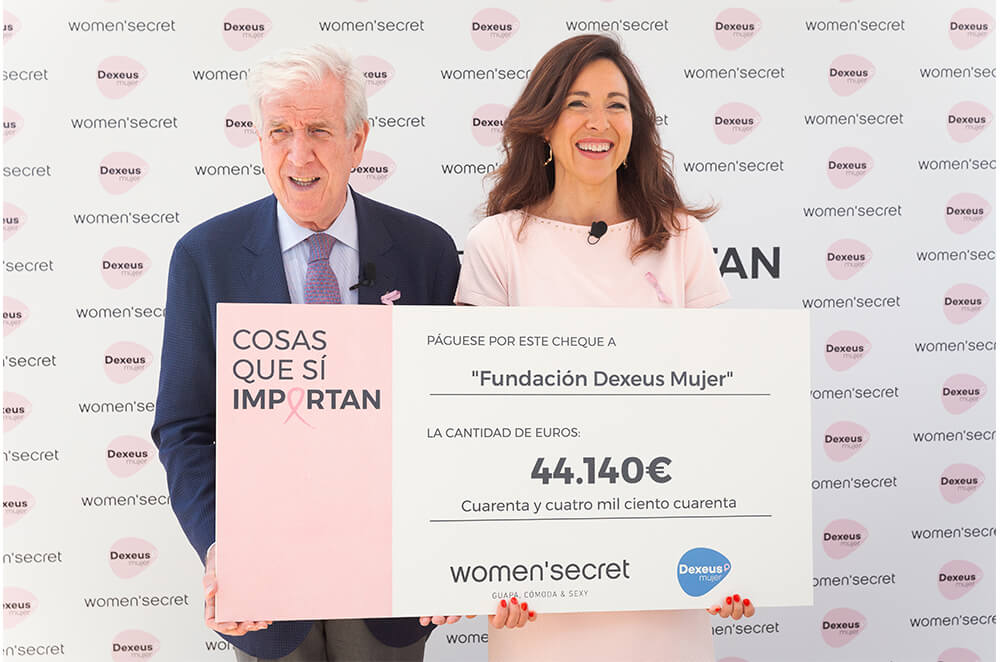 The solidarity initiative promoted by the two entities Women’secret and Fundación Dexeus Mujer, Cosas Que Sí Importan (THINGS THAT MATTER) donates to the Fundación Dexeus Mujer € 44,000 of the profits made on sales of its range of the post-surgery bras collection, Post-Surgery Bra ( PSB). These bras are designed with the advice of experts […] 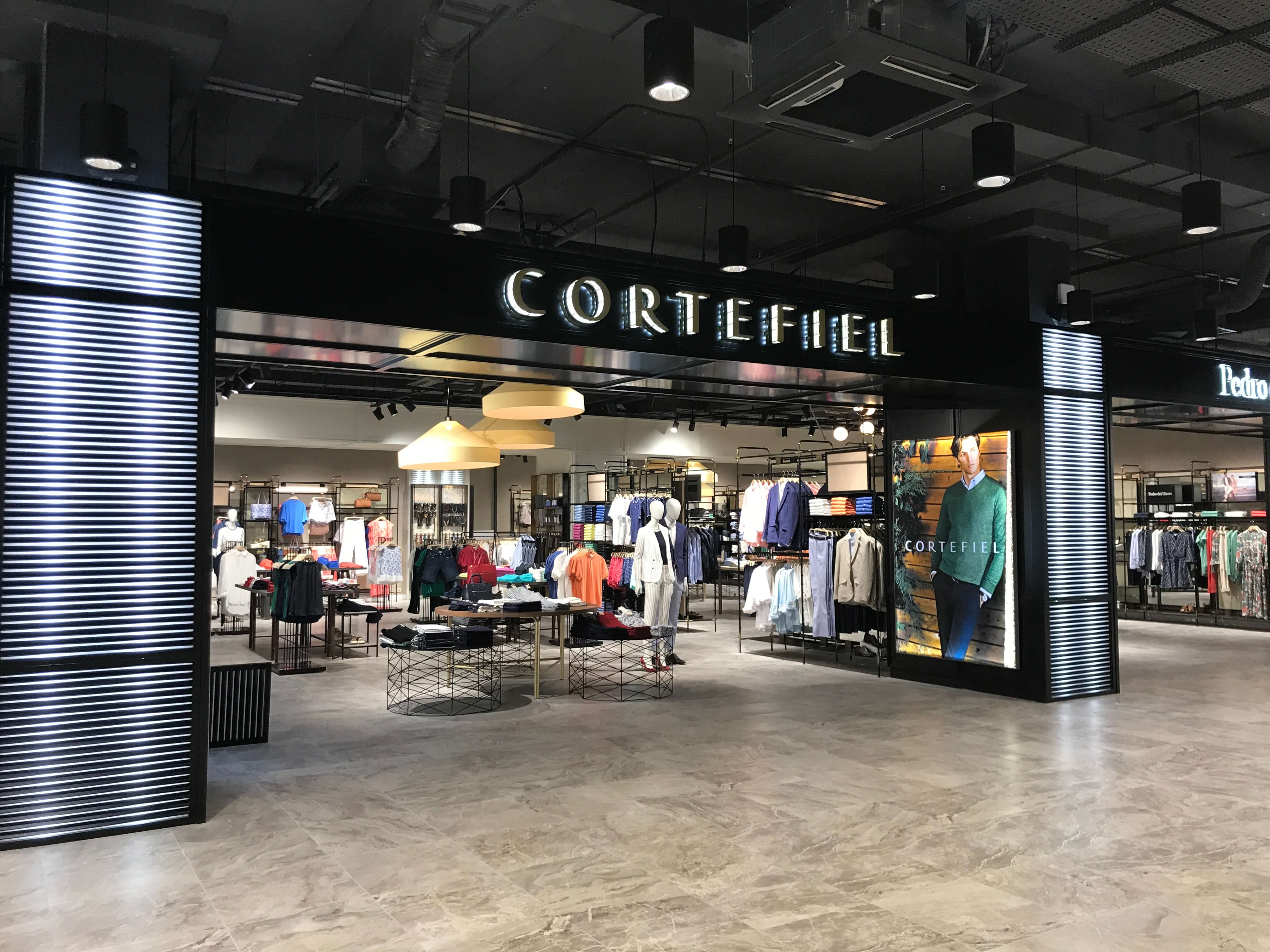 Total income reached 1,154.7 million euros, up 2.4%. Adjusted EBITDA grew by 48% to 170 million euros. Tendam’s online business – which has now overtaken the physical stores in terms of profitability – grew by 26%. Gross margin has improved by 3.4 percentage points. The Tendam brands’ loyalty programmes now have in excess of 22 […] 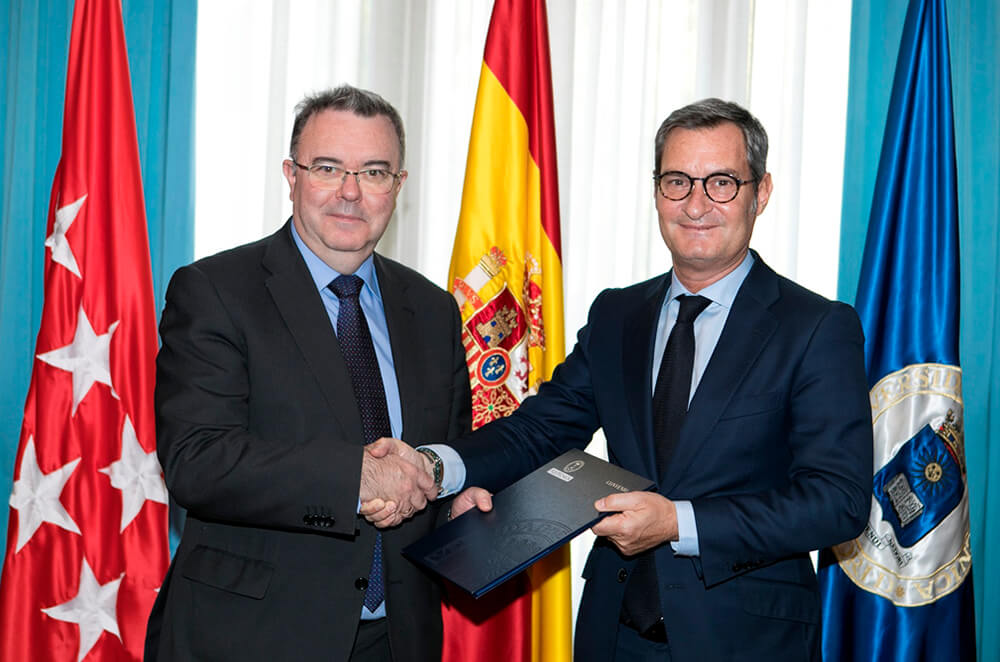 Under the terms of the agreement, the Tendam Classroom – Advanced Fashion Design Centre for Sustainability, Responsibility, and Innovation in Fashion Design will be created Tendam, the retail company that includes the brands Cortefiel, Pedro del Hierro, Women’secret, Springfield and Fifty, and the Universidad Politécnica de Madrid (UPM) announced the signing of an agreement to […] 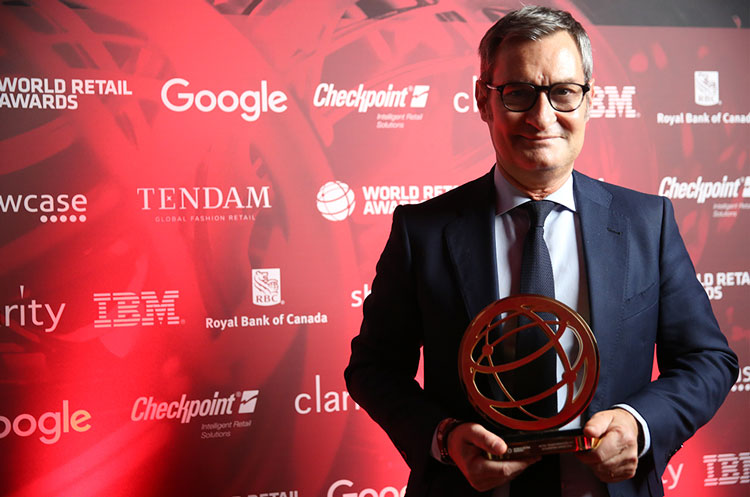 Tendam – the group encompassing Cortefiel, Pedro del Hierro, Women’secret, Springfield y Fifty – takes home the ‘Retail Transformation and Re-invention’ prize at the sector’s annual global awards ceremony.   The achievement affirms the company’s positive progress amid an ambitious transformation plan which reached a significant milestone this week with the launch of a new […] 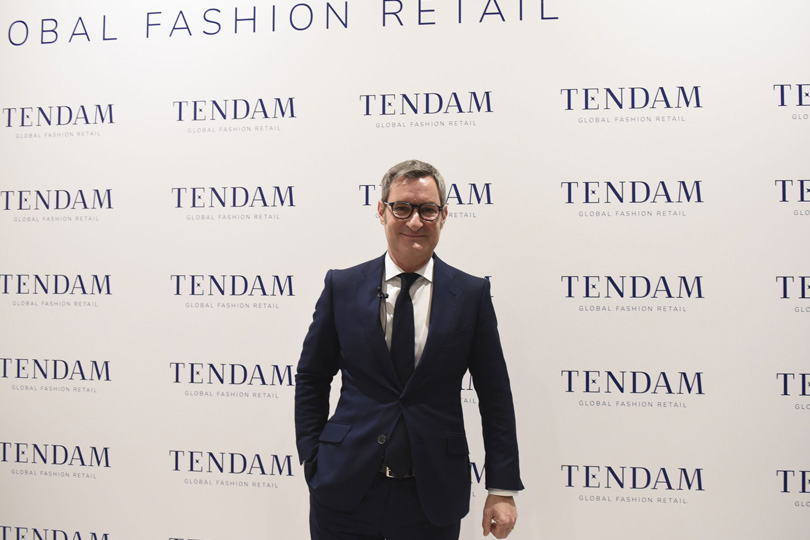 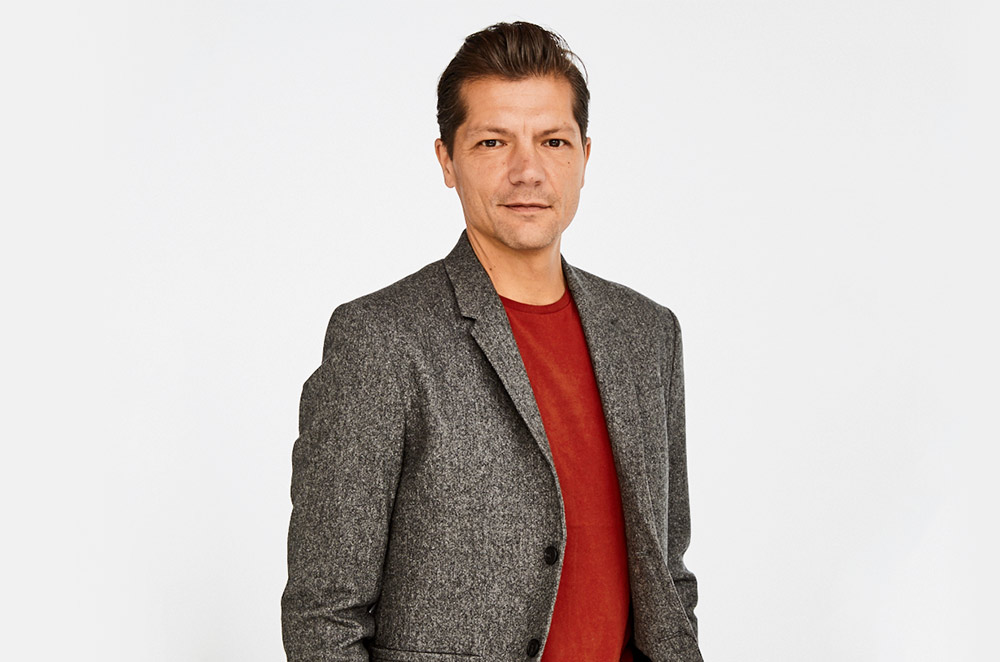 Marc Calabia has over 20 years’ experience in senior management roles in the sector and will lead the future development of the company’s youngest, most urban brand.

Women’secret opens a store in Catania

A new space in Sicily ads to a year of international expansion for the brand. 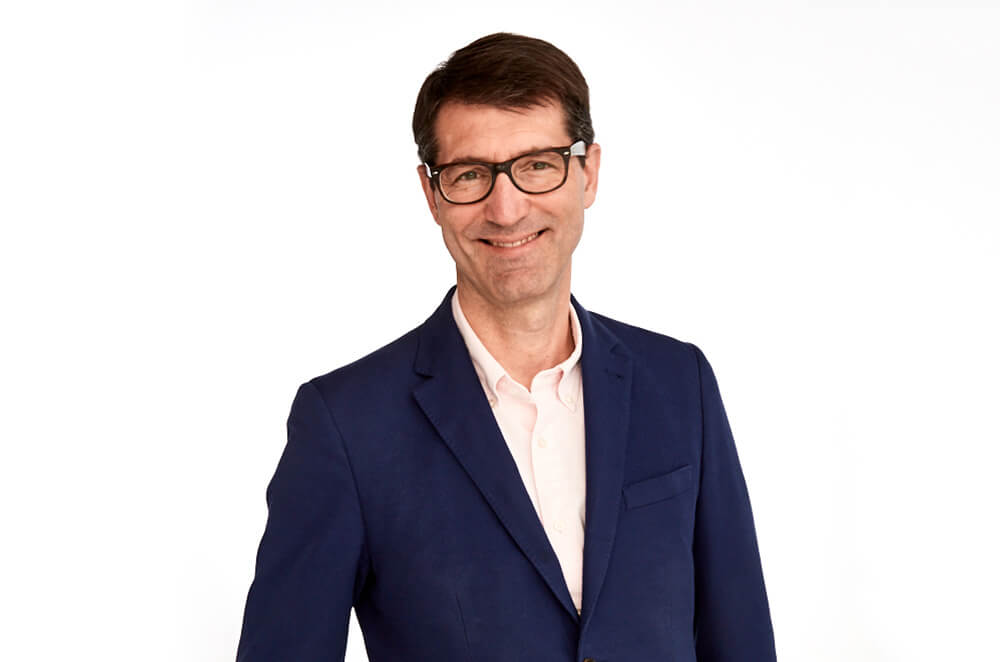 The Chief Customer Officer, a newly created position within the Group, will sit on the Management Committee and reporting to the CEO.

Grupo Cortefiel reinforces its presence in Cuba and Costa Rica

Women’secret opens a store in Paris

Cortefiel, a Spanish fashion brand since 1945, has presented its campaign for this Fall-Winter 2017 season: ‘Algo que compartir’ (‘Something to share’).

For this new winter campaign called A Common Life, SPRINGFIELD has revealed a fashion film in which Miguel Ángel Silvestre’s most personal side is shown

Women’secret and Dexeus Mujer, united in the fight against breast cancer

This morning Women’secret held a press conference introducing Elsa Pataky as the protagonist, for the fourth consecutive year, of its Fall-Winter 2017 campaign.

Women’secret opens a store in Lyon

Grupo Cortefiel launches a new Women’secret store in France with a nearly 200-square-metre space on the centrally located street 9 Président Carnot in Lyon.

Grupo Cortefiel is inaugurating two Springfield corners for men and women in Slovenia’s capital, Ljubljana, and another Springfield store in the coastal city of Koper.

Grupo Cortefiel has incorporated payments using your smartphone in all of its five chains in Spain through the Android Pay app.

Women’secret celebrates the opening of its first establishment in Cuba at the Gran Hotel Manzana Kempinski, a premier 5-star hotel located in Havana’s historic district.

Grupo Cortefiel is pleased to announce the appointment of Marie Castellvi-Dépée as Cortefiel and Pedro del Hierro General Manager.

Grupo Cortefiel donates more than €131,000 to the four beneficiaries of the 2016 ‘Get Involved’ Project

The ‘Get Involved’ project’s latest effort was its second most successful fundraising ever, raising a grand total of €131,353 which will go towards four charitable projects.

Tendam signed yesterday an expansion agreement with Tablez Retail Group to bring two of its brands, Springfield – a youth-oriented casual fashion brand and Women’secret – an innerwear, swimwear and sleepwear brand, to India and Sri Lanka in a gala ceremony held at the Shangri-La Hotel in Bengaluru.

Eva has stood up for creating high performance commercial teams with an important identification with the brand, contributing to get the current leading position in the domestic market as well as the important growth in the international one where it is present in more than 70 countries.

Marcos Gómez has leaded the corporate and financial processes taken by the company during the last decade and will continue cooperating directly with the Board of Directors outside of the executive line.

Jaume until now held the Managing position for Cortefiel

Mario Casas and Úrsula Corberó: the ambassadors of the new campaign star the new fashion films that will launch Springfield’s summer big wave.

Women’secret continued to innovate with its campaigns, this time opting for a cutting-edge format: a Boat Movie.

This initiative, which began in 2005, seeks to help non-profit foundations by donating funds raised in charity markets from selling garments from the current or previous seasons