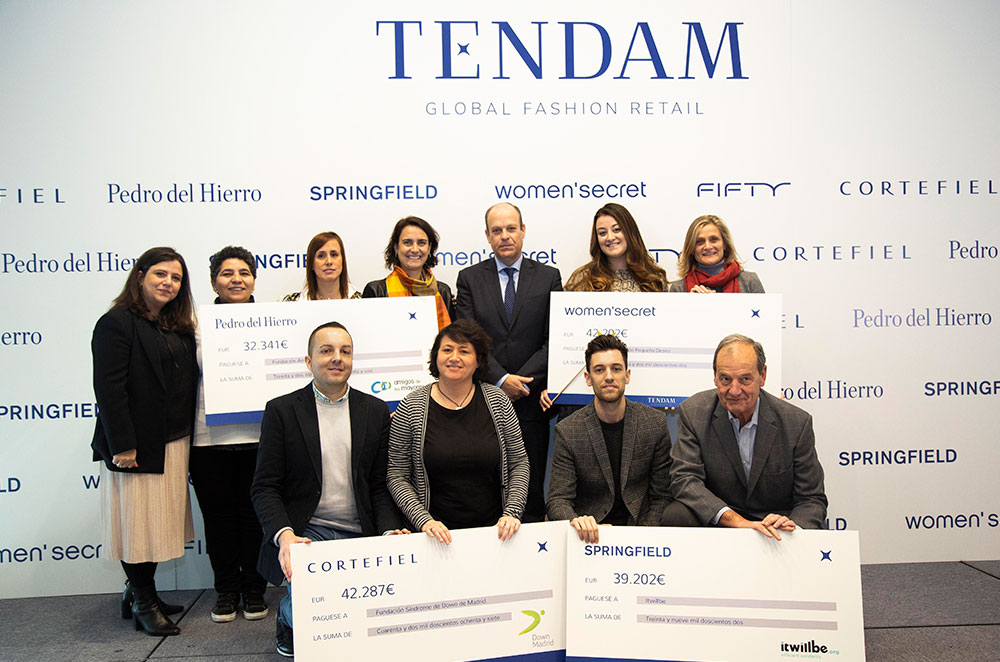 Tendam delivers more than 156,000 euros to the four entities benefiting from the project Involucrados In the 13 years of this initiative almost one and a half million euros have been raised. Tendam increases the amount collected one more year and distributes 156,032 euros between the Pequeño Deseo Foundation, ItWillBe, the Síndrome de Down Madrid […]

Tendam increases the amount collected one more year and distributes 156,032 euros between the Pequeño Deseo Foundation, ItWillBe, the Síndrome de Down Madrid Foundation and the Amigos de los Mayores Foundation, the four solidarity organisations that are finalists in the Involucrados 2018 project. The donation was made during a breakfast at the NH Collection Eurobuilding hotel where the collaboration and solidarity of Tendam brands, Women’secret, Springfield, Cortefiel and Pedro del Hierro brands was thanked.

In the 13 years of this initiative, 1,476,834€ has been raised for 53 projects of 41 social entities. An important number of organizations with social action and international cooperation projects are presented to the call, which takes place every year in February through the Tendam website.

Once again, the Involucrados Project has contributed to promoting different social actions related to disability, childhood and the elderly. At the beginning of February, the new 2019 call for projects will be opened.

During the breakfast of the delivery of cheques, the people in charge of the benefited entities explained the projects and how they are going to use the funds collected in the solidarity rakes.

From the Amigos de los Mayores Foundation, its president Mercedes Villegas has highlighted that thanks to this help the program “Ningún Mayor Solo”, which seeks to contribute to the welfare of the elderly, will be able to provide company to 800 elderly people and create friendship with the same number of volunteers. We will also be able to carry out more recreational and social activities – such as snacks in the neighbourhood, cultural visits, workshops, parties…-, which allow the elderly person to get to know other people, recover their social life and live new experiences that benefit their physical and cognitive capacities.

In addition, the technical director of Down Madrid, Paula Martinelli, has commented that with these funds raised the project “Involucrados con la salud una apuesta de futuro” will grant 183 children the treatment of digestive and respiratory physiotherapy, and treatments to prevent myofunctional alterations, swallowing and sensory integration. Specifically, participation in Involucrados has provided us with resources to provide 1,800 sessions of physical therapy to our children with Down syndrome or other intellectual disabilities and to improve their health.

For Arancha Martínez, director of the organization ItWillBe, this sponsorship has allowed them to finance the implementation of the App for Biometric Recognition to protect children against the exploitation of mafias in India. With these funds they will collaborate with Don Bosco and with several centers of the ChildMiss child protection network in the Asian country. This is a very complex project and requires technological innovation, institutional support in the country and many economic resources, because in addition to identifying the children, you have to do psychosocial work with each of them, and this is complicated and expensive because they are children with a very, very hard background. For example, in the city of Bangalore alone, more than 4000 children have been worked with (89% of them were lost or runaway children; the rest were labour exploited children, victims of trafficking and abandoned children).

At the Pequeño Deseo Foundation their “Tejiendo sonrisas” programme will become a reality and they will be able to fulfil the wishes of chronically or seriously ill children. With the funds received they have begun to manage the petitions of more than 50 children and young people and as their president Cristina Cuadrado explains, they are going to make the wishes of a lot of children come true and therefore bring joy, strength and hope and make their daily fight against the disease more bearable. With the funds we have received in 2018 we have already achieved 12% more wishes fulfilled.

For the four entities to form part of the Involucrados project contributes to develop different aspects that favour the integration of their volunteers and to make themselves known through the Tendam initiative, as they have the opportunity to distribute information and explain their projects to the attendees who come to the two calls of the solidarity rake.

The projects and their collection

Pedro del Hierro has put at the disposal of the Amigos de los Mayores Foundation the amount of 32,341€, to develop the program “Ningún Mayor Solo” that seeks to contribute to the welfare of older people, preferably those who are in isolation and / or have physical or mental difficulties, offering affective and social support through the action of volunteers and qualified volunteers.

Cortefiel has donated 42,287€ to the Down Syndrome Foundation of Madrid Through the project “Involucrados con la salud una apuesta de futuro” they offer myofunctional stimulation and swallowing sessions; sensory integration sessions; and digestive and respiratory physiotherapy sessions for children from 0 to 6 to favour their health and increase levels of physical well-being.

Springfield has given 39,202€ to the ItWillBe organization which is going to finance the implementation of the Facial Recognition App developed by the ItWillBe organization to protect children against the exploitation of mafias in India. The overall aim is to identify street children to remove them from abusive and exploitative situations and integrate them into society through education and training.

Women´secret has collected 42,202€ for the Pequeño Deseo Foundation. The proceeds will go to the Pequeño Deseo Foundation’s “Tejiendo sonrisas” project to fulfil the wishes of chronically or seriously ill children in order to bring them joy, strength and hope that makes their daily struggle easier. Today they have already been able to make more than 60 wishes possible, especially those that involve knowing a football player of the big teams of the league.